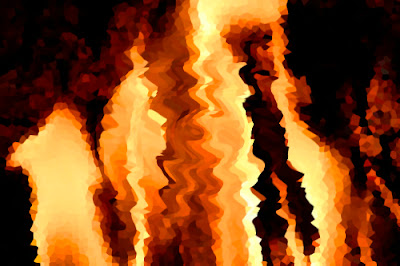 .
But we are so fortunate; we are alive and well and only lost part of a wall (and cheap paneling). The fire was contained to a laundry room and started inside a wall. An inside wire went haywire, and that was enough to set off a spark, which set off the insulation. We could smell smouldering, but we couldn't find the flames.
.
Then we saw the swirling smoke.
.
We called 911; two fire trucks and about six firefighters arrived, and they spent two hours putting out the hot spots. Just as they arrived, the fire was JUST to the point of igniting and would have spread rapidly. The chief said that the house would have probably burned to the ground.
.
Fortunately, we were home and it was early in the evening; had we been away, we would have lost our house. Worse yet, had we been home but asleep, we might have lost our lives.
.
Unfortunately, the very next night (Friday), the Hernandez family wasn't so lucky; four people (two children and their parents, the mother four months pregnant) died in a fire that started in their basement.
.
Unlike us, they were dealt a bum hand, and they had almost no chance. Three teenage girls did escape the fire, but they had to jump from a second and third story window.
.
Read the whole story here.
.
My husband and I will be donating some money to a fund that will help defray their funeral expenses and the transport of their bodies to Mexico for burial.
.
If some readers of this blog could find it in their hearts to make a small donation to this family that has suffered so greatly, that would help them so much. This blog has about 50 readers a day (sometimes more, sometimes fewer), so every little bit would surely help.
.
The address:
.
Salvation Army
Hispanic Worship Center
257 E. South Street
York, PA 17403
.
Make out any checks to the Salvation Army, with a Hernandez family notation.
.
By the way, I don't know the Hernandez family at all, but I do feel a connection with them.
.
Most important: hug your children, family, and significant other.
.
And check your fire alarms. Tonight. Before you go to bed.
.
Best to all,
.
Jennifer
Posted by Bugzita at 5:03 PM