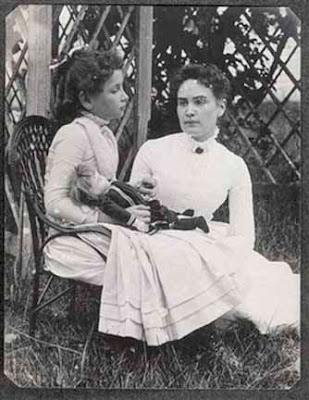 (This 1888 photo released by the New England Historic Genealogical Society in Boston shows Helen Keller when she was eight years old, left, holding hands with her teacher, Anne Sullivan, during a summer vacation to Brewster, Mass., on Cape Cod. A staff member at the society discovered the photograph in a large photography collection recently donated to the society. When Sullivan arrived at the Keller household to teach Helen, she gave her a doll as a present. Although Keller had many dolls throughout her childhood, this is believed to be the first known photograph of Helen Keller with one of her dolls.

BOSTON - Researchers have uncovered a rare photograph of a young Helen Keller with her teacher Anne Sullivan, nearly 120 years after it was taken on Cape Cod. The photograph, shot in July 1888 in Brewster, shows an 8-year-old Helen sitting outside in a light-colored dress, holding Sullivan's hand and cradling one of her beloved dolls.

Experts on Keller's life believe it could be the earliest photo of the two women together and the only one showing the blind and deaf child with a doll — the first word Sullivan spelled for Keller after they met in 1887 — according to the New England Historic Genealogical Society...

I have always admired Helen Keller, the way she was handed two major life challenges and still managed to become one of the greatest thinkers of the 20th Century. Of course, Annie Sullivan should receive much of the credit--two great women coming together and changing the world--at least in the way that showed that so-called handicaps could be overcome and even used in positive ways. In another family, Helen Keller might have been hidden away and viewed as subhuman, a great mind locked away forever.

I have a bit of a personal angle here.

It was early 1957; I was just six, living in Alhambra, California, in a boarding house with my mother and stepfather, who were trying to save their marriage. (Why we had to live in a boarding house for that purpose, I'll never know, but it didn't work--another story).

As boarding houses go, it was a pretty nice place. The owner and her daughter were very loving people who made me feel welcome and safe at a time when I was very unhappy and somewhat naughty (their neighbors ended up building a fence because I was beating up on their kid).

Although I don't remember their names, I do remember the owner reading me stories at night and making sure I had a goodnight kiss and was properly tucked in--the kind of love that all kids need and deserve. I'll never forget her face and will always be grateful to this stranger who treated me, a paying guest, like family.

The daughter introduced me to the joy of tacos and also taught me how to make them. She also allowed me to watch as she built a frame for her slip, a kind of plastic Rube Goldberg device that allowed teenage girls to swing around in those those pouffy poodle skirts.

We stayed a few months, almost a lifetime for a six year old, but most of the guests were short term; people seemed to come and go all the time, and being used to moving around all the time, I didn't think too much about it.

One day, two new guests arrived, an elderly woman with a cane and her assistant.

The owner introduced them to me, but, again, I don't remember names--which is why I can't be definitive about who I met back then.

The owner told me that the lady with the cane was deaf and blind, but added, "She can hear you with her fingers."

The woman said something to me and with help from her assistant reached out to me and touched my neck.

"It's okay," the assistant said. "Just introduce yourself."

The woman gently touched my neck.

"Hello, Jennifer." Her fingers still on my neck. It's strange, but when she touched me, I was no longer afraid, nor did her touch tickle me.

Still, I couldn't figure out how she knew what I had just said. I blurted out, "How'd you do that?"

She just laughed. "My fingers are my ears."

Needless to say, I was totally fascinated and taken with this woman who could neither see or hear. Even then, I understood the obstacles this lady must have faced; still, her fingers were gentle and tactile, even though I didn't understand how vibrations could be translated into words.

She and her assistant stayed just a few days, but whenever they were around, I was a total pill, hanging close by, yakking at this lady and trying to figure out how she was able to communicate.

This is what I remember: My new friend (and her assistant) explained to me that she was able to "hear" me through her fingers because the voice makes certain sounds which then translates into certain words. But most of the time we just talked about mundane "kid" topics, and I soon forgot about her "handicaps." In the way that kids seem to do, I adjusted quickly to her reaching for my neck and soon didn't even think twice about it. Yet, had anyone else reached for my neck, I would have screamed and squealed.

Fifty-one years later, I still don't know how this extraordinary lady was able to communicate so easily with a hyper six year old whose nickname at that time was "The Question Box." But she did, and even tried to answer my incessant and annoying "why this and why that" questions.

When the lady and her assistant were packing up to leave, I bawled and begged them not to go. But people have their lives and must move on. Even then, I understood loss on many levels, and this lady seemed to understand that. Her goodbye was gentle but definitive.

I like to think that the blind-deaf woman I met was Helen Keller, but no matter who she was, she had a huge impact on my life.

Come to think of it, maybe it doesn't matter at all who she was.

It sure didn't back then.