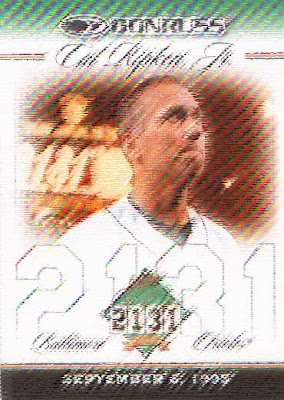 In recent days, I haven't felt much like posting here--maybe it's because I have been busy, but mostly I'm just tired of griping.

I need some positive forces in my life, so I felt it was a good idea to chill for a few days, which I did.

In fact, tonight I logged onto my email, intending to email the team that I was going to take a break from this blog for another week or so, but then I found this Spam Lit poem that is somewhat extraordinary, at least as Spam Lit poems go. Our spammer went to great lengths to cobble together a "poem" that actually has merit. In fact, I'm going to cut this person a break and not nark him/her out.

This poem reminds me of Cal Ripken, Jr. I'm not an avid baseball fan, but I adore Cal and go to great lengths to attend Oriole games when I know he will be there. My husband and I were there when Baltimore honored him on his last day as an Oriole (October 6, 2001). We were there when Baltimore sent him off to the Hall of Fame last July, and we got an unexpected treat when B.J. Surhoff was inducted to the Baltimore HOF: Cal showed up to deliver a speech in Surhoff's honor. Shortly after his speech was delivered, the heavens opened up, and it rained for two solid hours--the rain wouldn't dare crash down on Cal...

Quite simply, Cal is a class act, who always makes an effort conduct his personal and professional life in the right way. I have never heard the word "scandal" connected to the Ripken name. All of his charities have something to do with kids--his literacy foundation helps inner city kids to cultivate a love for reading, and he also runs various baseball camps for kids. As a ballplayer, he always signed autographs for the kids and never copped an attitude like some ballplayers.

I have never met Cal personally (I'd probably trip over over my own tongue if I did), but from what I have heard and read, Cal is genuine; what you see is what you get. Anyway, this one is for Cal:

In Winter Haven, the ballplayers are stretching
Standing in the way of the truth. A white
Rise, to the muffled chime of churchbell choir.
Only a fox whose den I cannot find.
A kind of snow, which hesitates
Out of the road into a way across
Only whirled snow heaped up by whirled snow,
What can we know of whatever picture-plane
Seen. What you know is only manifest
And trumpet at his lips; nor does he cast
Given by nature will soak into it.
"Be off!" say Winter's snows;
(The face of a Quos ego),
In search of brighter green to come. No way!
Comes up with as a means to its own end.
In realms of dingy gloom and deep crevasse
I've drifted somewhat from the distant heart
As it sits there like an eventual
Although December's frost killed the winter crop.
Life is good again.
Best,
Bugzita
Posted by Bugzita at 9:02 PM