Nomi's Secret Sarah Palin Name (Thanks to the Generator!)

I seriously lucked out:

With a name like that, I would be fully employed, insured, published. You name it.
Posted by Nomi at 9:41 AM No comments: Links to this post

The Wolves Heart Will Go On

This video contains pictures and videos of wolves that were murdered.

Got tired of all you immature hunters posting comments about blasting wolves to bits. No one cares that you're proud of killing an endangered animal. I'm sorry it's so hard for you to keep you pathetic comments to yourself.

I pity you for your lack of self control.

Alright, You guys have no idea how much the Bush/Cheney Administration upsets me. I mean, I just want to scream at them. So many wolves have and will be slaughtered this year, because they allow it.

It's just not right.

These animals are still on the endangered list, and now will have to stay longer. Humans have been killing them for YEARS, isn't it just about time to back off?
Leave the wolves alone.

If anyone deserves to be hunted and killed it's humans, no other animal has destroyed the world as much as us.

It's really a terrible world.

Three years from now, Will we still have wolves?

This graphic video is difficult to watch; these beautiful animals are being slaughtered by humans who are engaging in "aerial gunning," which gives unfair advantage to hunters with big guns and huge vantage point. I snarked about this on my site Snark.me.

I tried driving home a point with biting humor, but I have to tell you: this practice isn't funny at all.

The video speaks for itself.

Is Sarah Palin REALLY the Best the G.O.P. Could Do???? 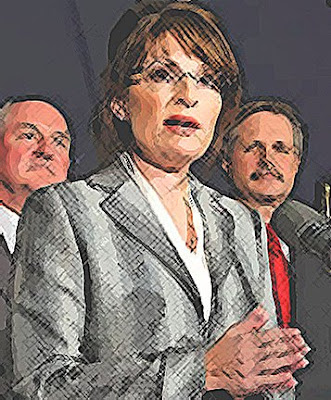 I'm going to take some vast liberties here and post an email verbatim from MoveOn:

Did you watch Sarah Palin's speech last night? The speech told us a lot about her.

It told us that she can distort the facts and deliver mean-spirited zingers with the best of them. It told us that if Rush Limbaugh or Ann Coulter ever need a stand-in, she'd be a great pick.

It told us that she can be condescending and dismissive of the real work Barack Obama did helping real people on the South Side of Chicago. It told us that she can uphold the long Republican tradition of lying about Democratic tax cuts—even though Obama's plan would give Americans a bigger break than McCain's.

But the speech—written by one of President Bush's speechwriters—didn't tell us the truth about Sarah Palin's extremist positions. And the more that people know her far-right views, the less they support her. (There's a partial list below.)

Online Letter Tool
Palin's speech and the reaction to it also made clear why McCain picked her. It wasn't a decision about who's most qualified to serve a heart-beat away from the presidency—it was a political decision about pleasing the far-right base of the Republican party.

Writing a letter to your local paper is a great way to make sure voters understand that. The opinion pages are the most widely-read pages of the newspaper. Write today, and your letter's a lot more likely to get published because it's so topical. It'll help sway the editorial board too.

Here are a bunch of points you might want to include in your letter:

--Palin recently said that the war in Iraq is "God's task." She's even admitted she hasn't thought about the war much—just last year she was quoted saying, "I've been so focused on state government, I haven't really focused much on the war in Iraq." 1, 2

--Palin has actively sought the support of the fringe Alaska Independence Party. Six months ago, Palin told members of the group—who advocate for a vote on secession from the union—to "keep up the good work" and "wished the party luck on what she called its 'inspiring convention.'" 3

--Palin wants to teach creationism in public schools. She hasn't made clear whether she thinks evolution is a fact. 4

--Palin doesn't believe that humans contribute to global warming. Speaking about climate change, she said, "I'm not one though who would attribute it to being manmade." 5

--Palin has close ties to Big Oil. Her inauguration was even sponsored by BP. 6

--Palin is extremely anti-choice. She doesn't even support abortion in the case of rape or incest.  7

--As mayor, Palin tried to ban books from the library. Palin asked the library how she might go about banning books because some had inappropriate language in them—shocking the librarian, Mary Ellen Baker. According to Time, "news reports from the time show that Palin had threatened to fire Baker for not giving "full support" to the mayor." 9

--She DID support the Bridge to Nowhere (before she opposed it). Palin claimed that she said "thanks, but no thanks" to the infamous Bridge to Nowhere. But in 2006, Palin supported the project repeatedly, saying that Alaska should take advantage of earmarks "while our congressional delegation is in a strong position to assist." 10

The plain fact of the matter is that Sarah Palin did a bang-up job delivering a Karl Rove-style political attack speech last night. That makes her a skilled politician but it doesn't make her views any more palatable for voters. Americans don't really want another far-right, anti-science ideologue in the White House.

Please help get the word out about where Sarah Palin really stands on the issues.

–Nita, Ilyse, Wes, Karin and the rest of the team

P.S. If you haven't seen it, check out the Daily Show clip on Palin. It's worth a watch:

*
Posted by Jennifer at 3:20 PM No comments: Links to this post